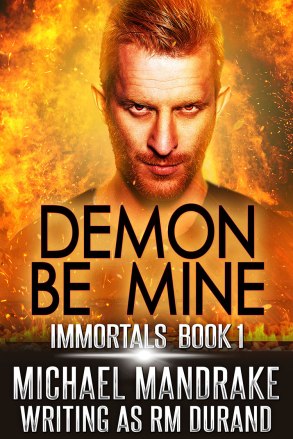 Eli’s actions earn him a ticket to hell where he meets Zylen. Falling prey to their desires could cause him to lose his soul to the devil forever.

Eli is a killer. Even in purgatory, the idea that his actions will go unpunished fuels him. However, the underworld’s newest resident is taken aback when he learns his new job won’t include what he loves most. Though he enjoys being a demon, he isn’t certain he’ll maintain his immortality. He must get over those barriers or suffer the consequences.

Zylen loves his occupation but being ignored by his supervisor makes life in the Realm difficult. He constantly questions himself, but his emotions won’t allow him to pull away. In the interim, he’s asked to take a student under his wing. Despite his feelings, he must complete the task given or face Lucifer’s wrath.

Eli must gain confidence or get kicked out of his home. Zylen’s teaching has to be successful or he’ll forfeit his boss’s trust. Can Eli pass and cement his relationship with Zylen under intense pressure?

Eli’s mental state is key to his survival.

Demon Be Mine features two men who find commonality and then love. If you enjoy a dark gay romance with demons, grab Demon Be Mine and satisfy your lust for morally bereft characters today!

All books in Immortals must be read in order.

Warning: This is a dark romance with torture, violence, and references to abuse.

Support my writing with Ko-Fi